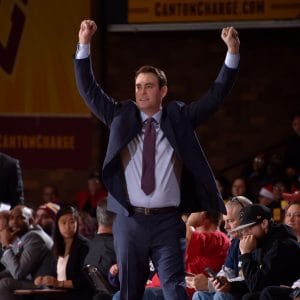 “We are excited for Chase to pursue this opportunity with one of the best clubs in Australia,” said Wisconsin Herd General Manager Dave Dean. “We thank him for his dedication and leadership during our historic 2019-20 season and wish him all the best in his next chapter.”

In his lone season with the Herd, Buford, 32, led Wisconsin to a league-best 33-10 record before the season was suspended due to the Covid-19 pandemic. The team led the G League in rebounds (52.5 rpg) and opponent field goal shooting (42.9%) and ranked second in scoring (120.9 ppg). Buford was named G League Coach of the Month in January 2020, and three Herd players earned NBA call-ups during his stint in Oshkosh.

“We are proud to welcome Chase as the Head Coach of the Sydney Kings,” said Paul Smith, Sydney Kings owner and chairman. “Chase is a widely respected coach and has shown a special ability to develop players both on and off the court. His proven success, leadership, communication skills and basketball intellect make him the right fit to lead our team into the future.”

Statement from Sydney Kings CEO/General Manager Chris Pongrass: “We conducted an extensive global search, and we’re thrilled to appoint Chase to lead the club into an exciting new chapter for the Sydney Kings and basketball in NSW more broadly. Chase is joining us on a multi-year contract and will play a key role in our wide-ranging commitment to the growth of basketball in Sydney. I am looking forward to working closely with him and continuing to build a competitive program of sustained success and development.

“I would like to thank Jon Horst and the Milwaukee Bucks for their openness and assistance throughout this entire process. We look forward to maintaining a strong connection between us and the Bucks moving forward.”

Statement from Chase Buford: “I’d like to thank Dave Dean, Jon Horst, Coach Bud, Peter Feigin, and the entire Bucks organization for the opportunity to begin my career as a head coach. I am so appreciative of the belief and trust they showed in me and my staff. I’d like to thank Steve Brandes and the Herd organization for all their hard work making Oshkosh & Menomonee Nation Arena the best atmosphere in the G League. To my entire staff, specifically my assistants Chaisson Allen, Dennis Cutts, and John Little, thank you for your tireless work with our team, your comradery and friendship. To our Herd players, thank you for the most special year a coach could ask for. The way you competed for one another and shared in each other’s successes was so fun to watch and be a part of. I will cherish memories from that year for a lifetime.

“Herd Nation, what a bittersweet feeling this is. It goes without saying Oshkosh & Fox Valley have the greatest fans in the G-League and thank you for the massive support you showed me and our team. I will miss you guys like crazy.”

A native of San Antonio, Texas, Buford graduated from the University of Kansas where he played basketball collegiately for three seasons and was a member of the 2008 NCAA Championship Team. He began his career in professional basketball in 2012 with the Atlanta Hawks as a regional scout and was promoted to video intern. He was the coordinator of player development for the Chicago Bulls from 2015-17 and went on to G League assistant coaching positions with the Erie BayHawks (2017-18) and Delaware Blue Coats (2018-19).

The Herd will begin the search process for their next head coach immediately.